An Overcrowded Oktoberfest Opens in Munich

The 186th Oktoberfest beer festival in Munich, Germany has begun. Nearly 6 million beer lovers from around the world are expected to go to the festival before it ends on the 6th of October.

People hoping to enjoy this year’s beer festival started queuing at the gates at sunrise on the first day to get inside just after 9 a.m. As soon as the gates opened, many ran straight to the beer tents to make sure they would get a place to sit and drink at the long wooden benches inside. 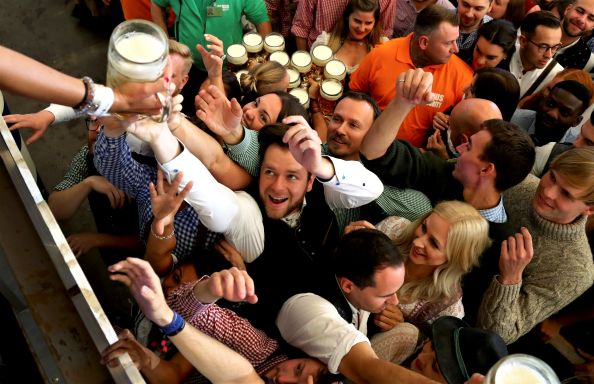 The opening of the festival was announced in English, German and Bavarian. A local dialect that is so strong that even German speakers from other parts of the country find it difficult to understand.

The cost of a ​beer at Oktoberfest has gone up again this year. With a traditional one-litre mug now costing €11.80 (around $13), an increase of €0.3 over last year’s prices.

Despite the rise in prices, even before beer started being sold to customers at noon. The festival was already so overcrowded that security guards only let people with reservations into the beer tents.

Around 600 police officers and hundreds of security guards will be at the festival, as well as 50 doctors. Traffic outside the festival will also be carefully controlled to stop people from drinking and driving.