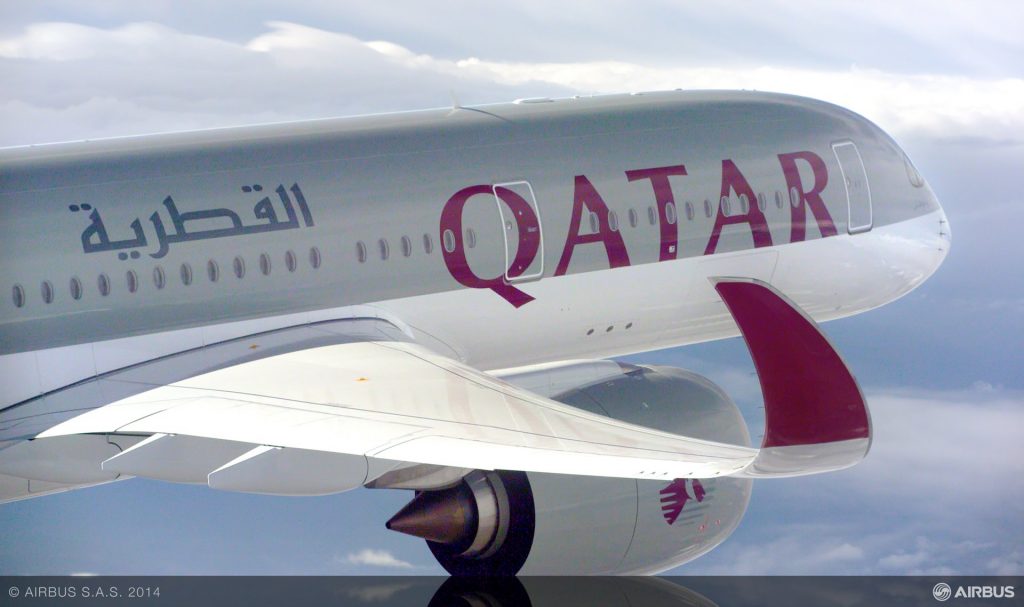 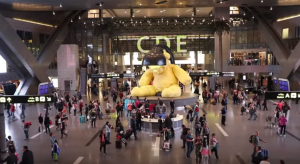 This was a 16 hour and 20 minute direct non stop flight leaving Doha’s Hamad Airport which was newly opened in 2014 and now serves over 37 million passengers annually. The most famous icon of the airport terminal is the giant teddy bear that sits in the middle. It is a 23-foot canary yellow teddy bear sculpted from bronze, that sits peacefully inside a lamp. There are a lot of things to do at the airport, many restaurants and shops including their own branch of Harrods. 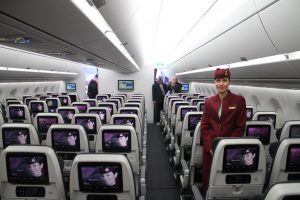 Onboard this beautiful new Airbus A350 the colour scheme is purple as you would expect from Qatar Airways. The seat configuration in Economy is 3-4-3.

The cabin is modern, spacious and overhead bins large and quite high so you don’t feel claustrophobic.

The IFE in flight entertainment is called Oryx and is great, has tv shows, games and unlimited movies even enough for a 16 hour flight. There’s plenty of leg room.

You get a lovely amenity kit which contains socks, eye mask, ear plugs, lip balm, toothbrush and toothpaste and every seat has a pillow and blanket. 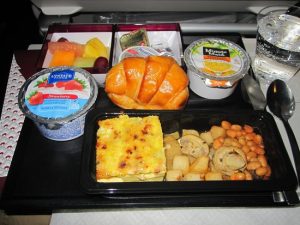 Shortly after a morning departure over the Persian Gulf the flight turns left to start its journey over Europe and then over the big pond to Florida.

After about 40 minutes after take off the first meal service starts which is breakfast. We were served a breakfast egg loaf with beans and mushrooms which was accompanied by a croissant, fruit, a yummy strawberry yoghurt, orange juice and cold water. 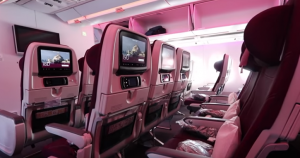 Followed by Alpha which is a brilliant film about a young hunter who befriends an injured wolf during the last ice age. A great film for animal lovers.

About 1 hour before landing (3pm Eastern time), dinner was served. This time a delicious chicken curry with beans and salad. Flight landed on schedule at 4.15pm and it felt like the 16 hours had just flown by literally. Probably because I managed to sleep comfortably for about 4 hours. 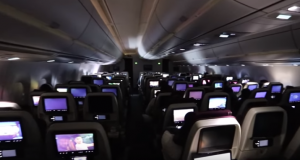 Overall this was a lovely experience. The cabin crew were friendly, efficient and always seem to be smiling even after 16 hours. Our luggage allowance was 30kg and Qatar Airways did not charge any extra for seat allocation. Qatar Airways is probably THE BEST economy class in the skies.

Book your ticket from now till 28 February 2019 for travel till 11 December 2019 and earn double Qmiles and double Qpoints in Premium Class or 50% Qmiles and 50% Qpoints in Economy Class for tickets booked with Qatar Airways. As a member, you will enjoy a range of exclusive privileges and benefits designed to make travelling even more rewarding.

Other Offers with Qatar Airways

We compare cheap flights with Qatar Airways and over a thousand other airlines and hotels in one place. Find great deals with Altitude Flights and book your next trip here today.